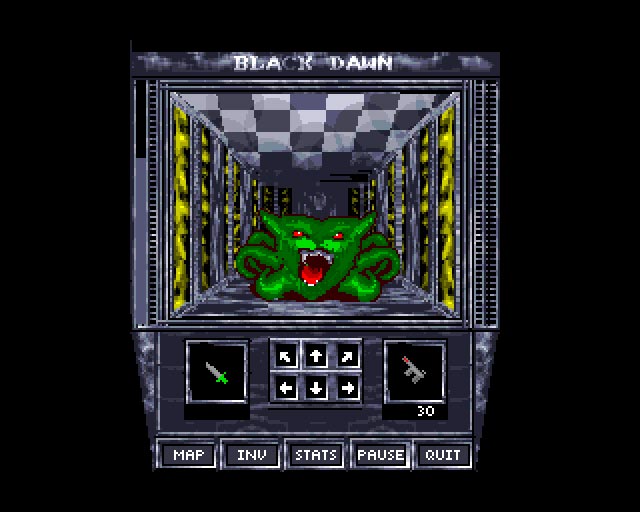 In this fantasy role-playing game, an army of evil extra-dimensional creatures is building above the Gandolan mountains, threatening the civilized regions to the south. There is no army to defend the lands, but if a few hardy adventurers can find a magical staff in the castle of a long-dead mage named Grelminar, the gate can be closed and the invasion averted.

The player controls a party of four characters, each with some standard-issue attributes: Strength, Dexterity, Constitution, Intelligence, Piety, Body Points and Magic Points. The game also features three of the usual character classes (fighters, mages and priests), and there are different spell lists for each of the spell-casting classes. Players can create their own characters or use the ones provided by the game; either way, progress is automatically saved from time to time (though there is a reset button which allows the player to start over from the beginning).

The game starts out in a town (which is portrayed simply by a text-based menu system) and then proceeds into a multi-level dungeon. While exploring the dungeon, different areas of the screen display different information. There is a first-person, ninety-degree-turning view, an automap and, in some areas, a textual description. These are supplemented by random third-person, turn-based combat encounters which take place in the window that normally shows the 3-D dungeon view. In typical role-playing style, combat yields rewards of gold and experience (and sometimes equipment), and characters gain in abilities as they increase in experience.