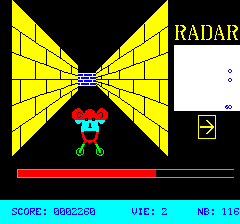 Twelve years have passed since the half-elf Pikto and his friends have defeated the evil demon and restored peace in the world of Arcusas. But evil raises its ugly head one more time. The capital city is attacked, the soldiers are massacred... Is the powerful sorcerer Vido to blame? But Pikto knows that in order to preserve peace in the land, different races - elves, dwarves, humans - have to unite. He must find faithful companions, venture to dangerous places. and save the world once again!

Arcus III returns to the traditional gameplay concept of the first game: the entire game plays from first-person view; pseudo-3D maze-like dungeons are home to randomly appearing enemies, which must be defeated in turn-based combat. Pikto and his companions can also learn a variety of magic spells.