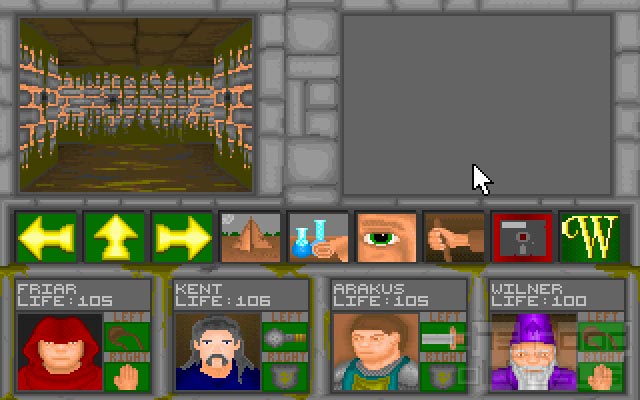 This is a standard fare dungeon crawl with a simplified Dungeons and Dragons element of character creation including Warrior, Priest, Mage, Rogue classes; Elf, Human, Dwarf races; and the rerollable statistics of Hitpoints, Dracos (Money), Intelligence, Strength, Constitution and Dexterity. Players control a party of four characters in a static grid based world with the top level being the relatively safe city of Locklaven including an Inn to recover hitpoints and mana and listen to rumors, an equipment shop to purchase gear, a casino to gamble, a church to heal and resurrect dead characters, and a guild to train characters. Beneath the city is a sewer system followed by a number of different levels corresponding to increasingly difficult monsters. Combat is randomly triggered by walking through the dungeon and is turn based allowing the player characters to attack first. Combat choices include a Basic Melee or Ranged Attack, Defend, Flee and Magic. Player characters are effectively lined up in a square for combat with the left and right most characters lined up in back and the middle two characters in front, meaning in combat only the middle two characters can use melee attacks while the left and right most characters must attack from range or use magic. Magic is broken down into the two primary classes of Priest and Mage. There are five accessible tiers of magic usage for each class and access to each tier is based upon character level. The first tier is available at level one. Access to tiers improves by one for each two levels gained, until the fifth tier is achieved. Leveling occurs when characters receive enough experience from slaying monsters to reach the next level tier. Players must then travel back up to the city of Locklaven and visit the Guild. There are no other major quests than the storyline driven rescue.